Chapter 55: Leonard, The Dalai Lama and my Mom

Posted by Kevin Flesher at 8:06 AM No comments:

There are strange claims staked at old Quest Lake,
where the diamond drillers toil.
Where the rock's so hard,
and the earth is scarred,
'neath pulsing hose line coil.
"Twas there I passed my nights away
with the northern lights above,
questing for that yellow stone,
that fancy ladies love.
So down we pushed the steely rods
all smeared with gooey grease,
to penetrate the lithosphere
and grind it to release,
those cores of precious quartz and ore
the geos love to see,
in search of veins of golden ore,
to make moolah, cash money.
Into this land of trees and lakes
we dwelt in rounded tents,
encircled by a bear deterring
electrifying fence.
Around the clock we banged our skulls
against the densest matter
with a flimsy drill at 45 degrees
coated in whale splooge splatter.
Near and far and all around
lay artifacts of rust,
left here to lay, till today,
by moiling men like us.
They also came not so long ago,
to see if the could wrest,
cash money, moolah, golden ore,
from beneath a lake called quest.
So suck it up ye workin' stiffs,
be glad to get a meal,
you can snap your backs
and have a heart attack,
looking for something real.
Just remember long from now,
when you are gnarled and old,
that you can still afford some H & B
if we can mine some f***ing gold!

I wrote that poem on the lid of a core box a few days ago as i was perched above the diamond drill, watching the steel rods spinning and grinding their way into the canadian shield. The guys here at camp really liked it, and Wes, the geo is going to ake it home and put it up in his office.

A few days ago a twin otter float plane crashed in Yellowknife, killing both pilots and injuring the seven passengers. It was the same plane that brought us here, and it had just been here at our camp 24 hours before it crashed, to pick up and relieve us of Duane, the dirtsnake driller that I used to work night shift with.

I was not sad to see him go. Even though he was only 39, he looked 60. Beaten up by years of crack addiction, two packs a day and who knows what else. Apparently he never sent money home to his wife and three kids but just went on a wild bender every time he got out of camp. He couldn't figure the drill out and working night shift with him was an agonizing nightmare. Working with Bob is much, much better.

This is a wild and rugged place. seen from the sky, it is an immense, unending sea of rock, dotted with infinite lakes and carpeted with lichen, weedy evergreens and birch. There are bears, moose, wolves and other nameless things here. I have heard several tales of bear maulings and about one guy who was feeding a wolf that came near his camp. It was a solitary female wolf. he went out onto the lake ice to feed her. She came back day after day. She demurely retreated and he followed, offering her food. She led him across the ice and into the woods, where the rest of her pack devoured him. All they ever found was part of his rib cage. So, I always keep my bear spray close at hand. There is a pump shotgun at the drill. the first round is an explosive bear banger, the next round is a rubber bullet, the rest are 12 gauge slugs.

I am working on the night shift on a diamond drill that runs 24 hours a day. After sleeping most of the day and eating a hearty meal, Buffalo Bob and I head out from our cozy camp across the lake in a fishing boat. It is customary to try to catch and release a few jackfish along the way. One of these days we're going to catch a big one. On the first day I arrived I hooked the biggest jack I've ever seen, but he gave me the slip.

So, we cross the lake, tie up our boat and then hike for half an hour through tamarack filled swamp and over lichen covered rocks to Quest Lake, where our canoe is tied to a birch. When we first arrived, they were brilliantly gold, now, day by day, as the nights grow longer and the freezing rains beat down, they are becoming skeletal and bleak. We cross Quest in a canoe, how many people in this day and age commute to work in a canoe? then we hike some more to the drill site. We tag off with the day shift and get all the engines roaring. Then we spend 14 hours toiling in the cold and dark, with wind, sleet and exhaustion banging at us. Lifting, cranking, wrestling with machines and rocks, mud and grease.

I keep a little fire going to warm up and rest by rom time to time. There have been some nights when the northern lights have come out to dance, as splendidly as I've eve seen them. Shades of turquoise and lavender dancing across the sky in great spirals and arcs. Reflected over the pure and merciless crystal clarity of Quest Lake. Buffalo Bob says that they are just waves of electromagnetic energy from solar flares, but i know better. when I see the lights come out, I pull my harmonica from my greasy, filthy overalls and play them a jig and they dance, as curious and playful as children.

So, all this work and toil should add up to a paycheck to keep the wolf from the door. Meanwhile my heart is sad from missing Yaya's birthday today, and I sure could use some hugs and kisses from my girls, but if I can stick this out, I should have enough money to be able to take the summer off to play festivals as Captain Thunderpants and continue my crawl towards intergalactic superstardom.

So, Beloved, as you lay warm in your bed, think of me for a moment, for I'll be up, and thinking of you. 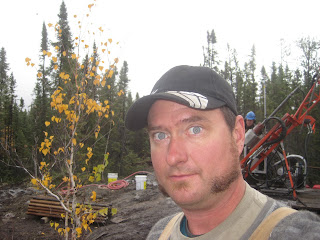 Posted by Kevin Flesher at 2:17 PM No comments:

There are strange claims staked at old Quest Lake
where the diamond drillers toil.
Where the rock's so hard and the earth is scarred
'neath pulsng hose line coil.
'twas there I passed my nights away
Posted by Kevin Flesher at 12:40 PM No comments:

the Further Adventures of Trashy Drifter
Chapter 53
Karaoke is like Hitch Hiking
So, I am no longer a grizzly guide.
Through some kind of karmic sweep up involving a gigantic invisible broom and dustpan, I have been made available for the next dance, but at this point, I am still the shy chubby girl with the floral dress meekly standing next to the punch bowl with my heart pounding and my palms sweaty, hoping I’ll be asked.
It would seem that it’s time for me to move on to the next chapter of my life, but right now, I have no idea what it will be. I’m on that blank page they sometimes put between chapters to make the book seem weightier.
I got up to start writing this because my head is so full of possibilities, hopes, fears and imaginary music that I felt behooved to finally spill a long overdue chapter of my life’s blood across a blank page. A message in a bottle.
The spring has arrived and daffodils and crocuses are busting through the green grass to the sound of frogs croaking and chainsaws clearing winterkill. Backyard BBQ’s and brush pile fires fill the air with a sure anticipation that long days of sunshine are coming. Veteran coasters who have been scraping by for years blink and smile. Those of us learning to get by on scraps and shreds hope and strive. Treeplanters put on their boots and bags, fishermen drag their nets from the lofts and some of us scratch our heads and wonder which way to jump.
After the bear season ended last year I dove into a bunch of projects and hobbies, all the while keeping my ear to the ground about getting some sort of permanent, stable employment tied around my neck. We looked seriously into going overseas to teach again. I turned down Saudi Arabia, but we were keen to work in Brunei, which didn’t pan out. I started an afterschool singing group at the elementary school, MC’d special events at Mt Washington, played a few gigs with the Dukes of Dodge, storytelling at festivals and libraries as CPTN THNDRPNTZ!!! Started a regular ceilidh, acoustic jam night, started a theatre company that did live improvised soap opera, became an apprentice stonemason and of course, served as a karaoke host.
Did you ever notice that karaoke is like hitch hiking? If you’ve done them both, then you know the uneasy, queasy feeling that you can get as you are taken for a ride by someone that you’d rather not have at the wheel. But no matter how you paw and clutch the door handle, there’s no way out, at least not until the end of the song. When someone gets that mic in their hand, they have the steering wheel and everybody’s ears are taken for a ride, like it or not. Sometimes that wheel/ song is a great and invigorating ride that renews you with hope and enthusiasm and philanthropy. It’s a great excursion in a sweet vehicle with a friendly competent motorist who buys you lunch and drops you off at your long sought destination and heart’s desire. Other times it feels like you’ve crashed in the ditch and rolled a few times and landed upside down in a bog before catching on fire by the time that a song has been thoroughly butchered, humiliated and ground into the pavement like festering roadkill that was once a sweet and nimble forest creature.
Actually, I quite enjoyed it. However, my enthusiasm for karaoke as a martial art and perhaps my bombastic southern preacher-like host stylings were not universally applauded. So, due to some mutterings and mutinous apostasy, my reign as karaoke lord was chopped short and my head tumbled from the guillotine and into the basket to be devoured by mangy vermin. At least that’s how it felt when that dreadful day arrived that the aforementioned giant karmic broom descended upon me and swept me up and snapped the tethers that kept me connected to my solipsistic concept of my place in the universe.
So, here I am, here we are. The future is an open horizon of endless possibilities.
Now, if I just knew what to do next…
Posted by Kevin Flesher at 10:42 AM No comments: